The Walls Are Ready, But Am I? 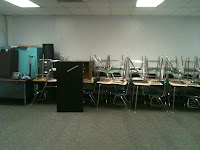 This afternoon I finished setting up my room.  As you can see from the before and after photos I felt that I needed to do something new and fresh this year.

In 2004 Fast Company published Harvard researcher Teresa Amabile's Six Myths to Creativity.  The fifth myth on the list was Competition Beats Collaboration.  It seems some companies supported the notion that promoting competition between work groups in a company led to higher levels of creativity and innovation.  Amabile's research found that creativity actually declined in those work groups because the competition robbed the groups of their most important creativity asset:  sharing.

Stand Up! Speak Out!

There was an error in this gadget